Hallo, Pooh, you're just in time for a little smackerel of something

Talking About Your Skills in Czech 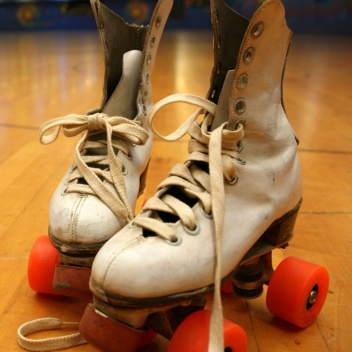 The Focus Of This Lesson Is Using the Present Tense and Imperfective Verbs to Talk About One's Own Skills.

"Yeah, I've been roller-skating for about two years. "

Moct translates as "can, be able, could, is possible'' and can be very useful when you want to talk about what you can or can't do.

When used formally, moct can also be written as moci, meaning ''to be able, can.'' In the formal form, the verb is slightly irregular in conjugation.

The modal verb moct has no meaning on its own and is used to modify the main verb.

A modal verb is usually followed by a verb in its infinitive form.

Můžu řídit "I can drive."

Furthermore, the verb can be followed by an object in its accusative form.

Můžu řídit motorku. "I can drive a motorcycle."

How moct / moci conjugates according to the person:

Tady se bruslit může. "It is possible to roller-skate here."

Moct should not be confused with umět ("to know how").

How to distinguish between moct and umět:

Unlike English, Czech language has only three basic tenses-present, past, and future. But this simplicity in tenses is compensated for by aspects.

The aspects of the Czech verbs are:

Most of the time Czech verbs are in pairs, and one is perfective, the other imperfective. From an English perspective, both verbs have the same meaning, but the difference is in their aspect. That means they differ in the sense of completion or incompletion of an action.

This indicates incomplete, ongoing, habitual, reversed, or repeated actions without a reference to their completion.

This indicates actions or a set of actions that have been finished completely.

Most basic verbs without a prefix are imperfective.

To make such a verb perfective, we just need to add the prefix.

In this lesson we will deal with the imperfective verbs.

They are used to express:

*In the following section, let's have a look at the imperfective verb jezdit ("to ride/ drive")

An action that we repeat on a regular basis:

An action that is in progress:

The duration of an action:

An action that has a very general character:

In the above examples, we don't really have too many specifics as to whether the riding, was, or will be completed, hence the use of the imperfective verb jezdit ("to ride"). Imperfective verbs can form present, past, and the compound future tenses.

Some Czech verbs only appear in the imperfective form.

Examples from the dialogue:

A jezdíš už dobře?
"And can you do it well?"

Jde to. Ještě neumim moc dobře brzdit.
"Could be better. I can't brake very well yet. "

Obě mé děti umí bruslit.
"Both of my children can ice skate."

Už umím řídit motorku.
"I can ride a motorcycle now. "

Roller-skating is very popular in the Czech Republic. Many new tracks have been designed not only within cities, but also across the country going from town to town, or around lakes and national parks. The most popular one is in Šumava National Park (http://www.npsumava.cz/en/). Depending on the season, some of other popular activities are mushroom picking in forests in the autumn, or blueberry picking in summer. Less common, but labelled as a renaissance of the use of medical herbs, is picking healing herbs in nature, especially for common illnesses such as colds, sore throats etc. In recent years Czechs have become more interested in exploring their own country and original culture, which is resulting in more people visiting Czech heritage sites, such as castles, manors, or other historical sites. Some of the most visited places are castles in Český Krumlov and Hluboká.

Try to write a sentence using the verb moct!

This is my goal for October! 😄

Don't hesitate to subscribe some of the currently discounted subscription plans, where you can also get 1-on-1 Access to a personal Teacher. 😎

I am looking forward to your reply.

děkujeme za komentář. Perfect! You can skip the commas next time, as their usage is not needed (and expected) in this simple sentence. 😉

thank you for your comment - really nice try! Just a small correction of your message: "Už mám černou bundu a zelené ponožky". No worries about that, Czechs would understand you.

děkujeme za komentář. Thank you for your comment, It is almost perfect :-) just a small correction of your message:

You can see that there is mostly used normal "y" on the end of each word, but in case you would talk about languages (english language, spanish language etc), you would use the form you used in your comment = anglický jazyk, španělský jazyk etc. 😎